Jewish presence in enlightened Edinburgh can be traced back to 1691, the year in which the minutes of Edinburgh Town Council recorded the application of David Brown, a professing Jew, to reside and trade in the city. The first Jew to buy a burial plot in Edinburgh was Herman Lyon. He came to Edinburgh from Germany in 1788 and described himself as a dentist and “corn operator” ie podiatrist and wrote a remarkable book on the subject. In 1795 he petitioned Edinburgh Town Council to purchase a plot of land on Calton Hill for a burying place for himself and his family. There is no trace of the plot today, but it is marked on the Ordnance Survey map of 1852 as “Jew’s Burial Vault”.

The first formal Edinburgh Jewish community was founded in 1816 and consisted of around 20 families.

1820
EHC
1820
In 1820 the community purchased a burial ground in what is now Sciennes Hill Place. It was in use until 1867 and is now under the care of City of Edinburgh Council. The Jewish cemetery in use today is in a section of the municipal cemetery at Piershill, with its own Ohel.
1825
EHC
1825

In 1825, the community acquired a tenement in Richmond Court in Newington and converted and equipped it for use as a Synagogue with 67 seats. This served the needs of the Community for 43 years until larger premises were purchased in Park Place to accommodate 95 men and 50 women. By the turn of the century, the community numbered about 500 and acquired a chapel in Graham Street for conversion into a Synagogue.

1879
EHC
1879
A small synagogue had also opened in 1879 in Caledonian Crescent in the west of Edinburgh serving Jews from Manchester who had come to work in the rubber works. A third synagogue known as the Edinburgh New Congregation was established in 1890 initially also in Richmond Court then moving to Roxburgh Place serving newly arrived Yiddish speaking immigrants from Eastern Europe. None of these early Shul buildings survives today.
1888
EHC
1888
In 1888 the Edinburgh Jewish Literary Society was founded; it remains the oldest of its kind in Britain still active.
1909
EHC
1909

In 1909 the Edinburgh University Jewish Society was founded and is the oldest in Scotland, possibly in Britain.

In 1918, Dr Salis Daiches became minister of the Edinburgh Hebrew Congregation. During the course of his ministry, which lasted 27 years until his death, he had a profound effect on the Jewish community. He united the community into a single cohesive unit and at the same time acted as spokesman for the Jews in Scotland during the troubled inter-war years. 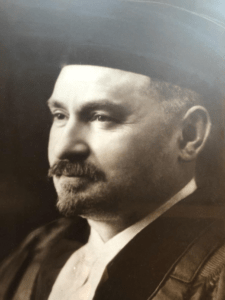 The beautiful Synagogue in Salisbury Road, built in 1932 to accommodate 1000 people, is a tribute to his leadership and vision. This was the first purpose built synagogue in Edinburgh and the site also houses a mikvah.

Rabbi Dr Jacob Weinberg was appointed in 1961. He followed the Daiches tradition of being an ambassador to the non-Jewish community. His erudition was reflected in the adult classes he ran in the Extra Mural Department of the University of Edinburgh. He educated a generation of Scots to be knowledgeable about the Psalms, the Dead Sea Scrolls, Modern Hebrew, Agnon and Maimonides. During these years, the community was fortunate to have the services of three wonderful chazzans, Rev. Zucher, Rev. Brysh and Rev. S. Knopp, who were all members of the same family and who encouraged each future generation to serve in Edinburgh. 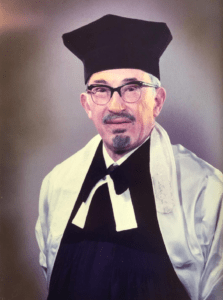 Rabbi Dr Daniel Sinclair of Jerusalem was appointed minister in 1984. When he returned to Israel in 1987, he had raised the standard of Hebrew education in the community and had left behind an enthusiastic group of teenagers knowledgeable in Judaism, able to conduct the services and read the Torah. 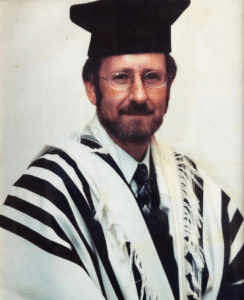 Rabbi Shalom Shapira, also of Jerusalem, and a Sabra, was appointed in 1988. His pastoral and spiritual care for members of the Community, assisted by his wife Rachel, enabled Judaism to thrive in Edinburgh into the 90s. 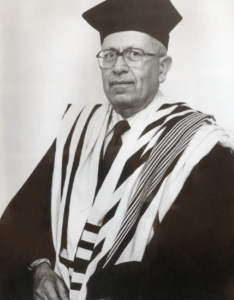 Rabbi David Sedley was appointed in August 1996 and brought the freshness of youth into the Community. Along with his wife Alit and family Avi and Shoshana, they made a great impression on young and old alike. In 2000, they left for a post in Leeds, and have since returned to Israel. Rabbi David Katanka served as part-time Rabbi following Rabbi Sedley’s departure; he was also a wonderful chazzan. 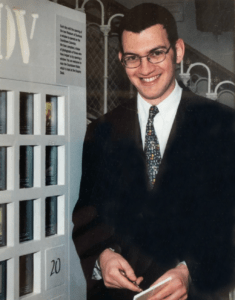 Rabbi David Rose was appointed in May 2003, and continues to serve the community as well as participating in interfaith and civic activities; his hospitality to both Community members and visitors alike is renowned.

The Scottish Jewish Archives Centre, located in Glasgow, holds a collection of material about Edinburgh Jewry – see their website www.sjac.org.uk or  email info@sjac.org.uk